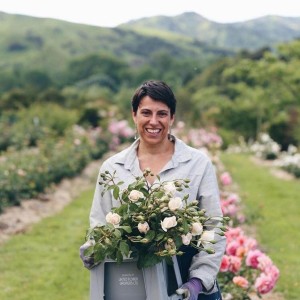 All images in this blog post belong to Christin Geall of Cultivated by Christin. They have been used with her permission.

As you know if you read my last blog post, I left Prince Edward Island on May 18th for British Columbia. First stop was in Victoria, on Vancouver Island. A few months ago I came across a flower farmer/designer whose design work I love more and more every day. Her name is Christin Geall and her company is Cultivated by Christin. In one sentence, according to her website, Christin owns an urban flower farm and design studio in Victoria BC, and writes a literary gardening column. But it was clear to me from reading the about section of her website that there was a lot more to Christin’s story…

Christin’s love for growing and tending plants began almost thirty years ago when she was a teen in Toronto. She apprenticed to herbalist Heidi Schmidt on the island of Martha’s Vineyard growing medicinal and culinary herbs and flowers, make teas and tinctures, and developing a nursery, as well as educating others about the healing power of plants. Christin completed a double major in Environmental Studies & Anthropology at the University of Victoria, studied ecofeminism at Schumacher College in England with Vandana Shiva, and ethnobotany with Dr. Nancy Turner in Victoria and Dr. Richard Ford in New Mexico. She also became the editor for her university’s environmental magazine.

At twenty-four, with a small inheritance left to her by her mother, Christin planted her first garden of her own on an acre land on a remote island on British Columbia’s coast. When she wasn’t growing, harvesting and selling the fruits of her labours she took time to travel and intern in other parts of the world. One of her internships was at the Royal Botanic Gardens, Kew, in England.

After having a child and taking her first creative nonfiction class, Christin got involved in green politics and took on the editorship of a museum’s magazine. Over the course of the following ten years she got her MFA in creative nonfiction, traveled extensively, and gained spent time learning and gaining experience working with plants and in gardens wherever she went.

Now married and back in her old stomping ground, Christin launched Cultivated by Christin in 2015 after studying floral design with Floret in Washington and Zita Elze in London. Her goal is to bring together her main loves: plants, flowers, writing and environmentalism. She also teaches two courses at her alma mater: creative nonfiction and environmental writing.

I reached out to Christin and arranged to visit her mini farm in Victoria the day I landed! My dear friend Ahava actually picked me up from the airport, we threw my suitcase in the back end of her station wagon and headed straight to Christin’s farm. Those of you who are familiar with Victoria will know that her neighbourhood — Oak Bay — is a maze of beautiful older houses surrounded by lush, well-tended gardens. The perfect spot for someone with a green thumb and experience with landscaping. Not being familiar with the city at all, I had no idea what to expect. Needless to say, although Christin had told me that she had an “urban” farm, I was not expecting it to be right in the middle of such a gorgeous residential neighbourhood. By the time we pulled up outside her house I was already in awe from having watched house after house slide past the window — a steady, uninterrupted flow of the type of home you see in home and garden magazines — each framed by enormous bushes and shrubs covered in blossoms and flowering vines climbing walls, spilling over fences, winding around chimneys and arching elegantly over doorways.

Christin’s home and business is located on a corner property. Her farm is quite literally the garden that surrounds her house. My first impression of Christin was that she is a no-nonsense, highly creative and incredibly astute business woman. It also immediately became clear that she does not shy away from hard work. She met us in the garden in her work clothes, and invited us to take a stroll around the farm with her. She has taken what, admittedly, is a relatively large yard, and utilized every square inch to create her little urban farm. Her garden is surrounded by high bushes that give it a private, secret garden feel. She has landscaped it to maximize space while at the same time creating a visually beautiful space to inhabit and work in. In the middle of the garden, in between raised flower beds she has built a trellis. She is patiently training vines to wind their way up the supporting posts to create a green canopy of shade beneath which she plans to host floral workshops. Her design space is a renovated garage — a work bench set up along one wall and a photo shoot backdrop set up in the corner. As she showed us around she described the vision that she is slowly implementing on her property over time. I could clearly envision what it will look like in a year or two. I cannot wait to see how her vision materializes.

With the international flower movement being led by so many creative women I love seeing how different floral business owners are building their businesses to better fit their busy lives as mothers, wives, sisters, daughters and entrepreneurs. It is interesting to notice how this generation of female flower farmers and designers — for whom family is a priority — are shattering the traditional notions of what a business looks like. While recent trends in agriculture have been towards larger acreage planted with one or two main crops, so many of the women I have been meeting through my floral work are working with extremely small plots of land, planting a wide variety of plants, and finding creative ways to maximize their income by developing diverse income streams. Instead of farming in a rural area and having to ship flowers into the city, Christin has decided to grow in the heart of the neighbourhood that she is serving. Her neighbours are her target market. By building her farm within the community that is home she is able to take advantage of her location by inviting florists and customers to come to her instead of having to invest time and money in transportation and delivery.

My visit to Christin’s was too short. She was preparing for a trip to the Chelsea Flower Show (you can read about her experience here) and needed to pack, and Ahava and I had a ferry to catch. Her vision and enthusiasm was so infectious that all I really wanted to do was pull on my rubber boots and help her. I also really wanted to have the chance to watch her design because I am a big fan of her romantic aesthetic. Her floral arrangements use foliage to add a weightless, graceful flow to her designs. I am not entirely sure how she does it, but the light always seems to be dancing lightly through the petals. Whether using vibrant hues or a paler pastel palette, her bouquets combine a diversity of texture and shape that I love. They make me feel as though I have stepped back in time into a historical fiction novel taking place in Europe in the mid 1800s to early 1900s. At the same time there is a timelessness to her work that defies any attempt to place it within a particular era.

I left Christin’s reluctantly, with a silent promise to myself to return at some point. I hope to have the opportunity to work on something with her in the future. In the meantime I continue to follow her on instagram and be inspired by her columns and blog posts. If you live in Victoria I highly recommend ordering flowers from her for your next special event. Or just treating yourself to a garden bouquet. If you are a florist this is one woman you need to add to your speed dial. You won’t regret it! Thanks so much for welcoming me to your farm Christin! I hope this second season is a terrific one for you! I look forward to watching your vision unfold, and very much hope that we find an opportunity for creative collaboration in the future!